Should advertisers worry about Facebook’s recently announced 83 million dubious accounts? This is an important question, because advertiser are driven by numbers, ahead of all else. However, it is key to note that fictitious and dormant accounts are a common characteristic of ALL social network sites. They are not avoidable. Thus, the question should be: what is the tolerable level of these accounts that advertisers are happy to live with?

81% of the world’s social networking population is found on Facebook, Youtube and Twitter combined. The quest (or more likely pressure) by these social networks to turn netizens’ content, provided freely on their sites, into money-making machines is turning them into ugly monsters. Implications for 3rd party software developers are dire.

2011/2012 British Premier League to be remembered for many reasons

Many people would agree that the 2011/2012 British Premier League will not be remembered only for the fact that Manchester City won it after 44 years, but this season will also be remembered for how it ended. The Twitterverse captured the nail-biting moments best. 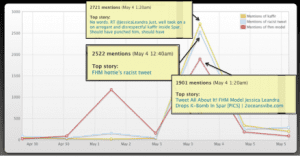 I am certain that Jessica Leandra dos Santos could not imagine what was going to follow from her ill-considered tweet, posted on the 3rd of May, where she used the word “kaffir” in her rant about some Black man who apparently committed an act of sexual harassment against her in an unnamed Spar retail outlet.

The MTN South African Music Awards 2012 was a huge success all round, judging by associated social network mentions during live TV broadcast of Mzansi’s biggest entertainment awards ceremony, on the night of April 30th.

I found SocialBakers’ ranking of Top 5 African Cities interesting. However, I also found that the ranking was not accurate, and support my argument with stats using the same tool (SocialBkers) and other reputable online sources.