#Zimbabwe had its moment in the Twitter sun this past weekend

Zimbabwe, a country with a population of nearly 13 million, had its draft constitution put to a referendum vote yesterday. News about this event was filled with predictions of chaos and violence on Friday. Thankfully, this prediction turned out to be a false alarm, as the day came and went without any major incidents bar the […] 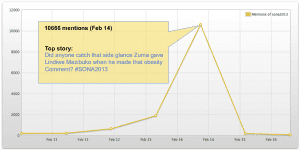 In part 1 of this SONA2013 series, I indicated that President Jacob Zuma’s State of the Nation Address this year got less than a third of Twitter mentions compared to last year. One reason that stood out for me was competition for share of voice on this day that doubled up as Valentine’s Day, about which there were over 3 million global mentions on Twitter alone. But closer home something else grabbed the nation’s, and the world’s attention.

Twitterers showed love (back) to President Zuma’s State of the Nation Address last night. However, according to Brandseye, SONA2012 registered more than 40,5K tweet mentions, while SONA2013 only got just over 10,5K mentions.

A lot of noise was made about yesterday’s Soweto derby between Orlando Pirates and Kaizer Chiefs, which ended in a 1:1 draw. While this can be expected as these two teams are the richest, most fan’ed and arguably most decorated in South Africa and rank high in the African continent as well, there was something more. As at 12:30 AM, #Sowetoderby had achieved just under 7,5K tweets, as measured on topsy.com. Let me use the power of Twitter to illustrate the fact that yesterday’s fierce soccer battle by the two Soweto giants captured the imagination of the world.

#DACongress trended on Twitter, thanks partly to party leaders 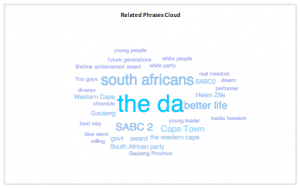 The Democratic Alliance (DA) had its elective congress this past weekend, where Hele Zille was reelected for her another 5-year term as the leader of the party. #DACongress also trended on Twitter. 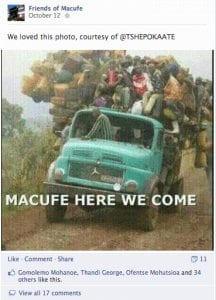 In this post, I share with you Facebook and Twitter highlights based on our social analytics relating to the recent Macufe 2012 event’s 15th anniversary, with an estimated 170 000 revelers attending from all over the country, the continent and the rest of the world.