As part of our environ-scan, it came to our attention that Arthur Mafokate – founder of music record label 999 and a trustee at BrandSA – has been accused of assaulting his girlfriend at the beginning of this month. You can read more about the allegation here.

The purpose of this blog is not the exploration of the merits and demerits of the allegation. Our interest lies in the impact this may or may not have on the nation brand’s reputation, especially on social media.

You can find BrandSA’s vision and mission here.

South Africa has an alarmingly high rate of women abuse. According to the recently released Demographic and Health Survey 2016 summary report by Statistics SA, one in five women experiences physical violence.

Women abuse matters came to a head only a month before Arthur Mafokate‘s allegations surfaced, with the news of the horrible killing of Karabo Mokoena – a 22-year old woman who was in an abusive relationship, and who was allegedly killed by her boyfriend in the end. A murder case against the boyfriend is currently in progress.

The killing of Karabo inspired war of gender hashtags – #MenAreTrash vs #NotAllMen, which are still doing the rounds on social media.

Men need to take ownership of #rape culture to dismantle it from within. #menaretrash @MG_Friday #downwithpatriarchy https://t.co/ltRWGBs81p

Given the context above, it is no wonder news that Arthur allegedly assaulted his girlfriend only fuelled the flames.

Less than 2 weeks after news of Mr Mafokate‘s alleged assault of his girlfriend came out, the self-proclaimed Queen of Twar – Ntsiki Mazwai –  entered the fray:

In response, we suspect, BrandSA published a tweet voicing disapproval against women abuse:

Every woman at risk deserves our protection. What are you doing to #ProtectThem? pic.twitter.com/4I5QbOVxU8

But it seems this was not enough:

It will be good to hear about the steps you have taken re: Arthur & Cici incident that landed her in hospital with a pelvic replacement

A tweetstorm had been ignited, as shown by a spike in BrandSA Twitter mentions in the graph below. 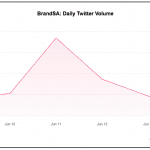 On a weekend when South Africa had 3 biggest sporting national games – by the Springboks (Rugby), Bafana Bafana (Soccer) and the Proteas (Cricket) – and one of them breaking a record, the controversy surrounding Mr Mafokate stole the limelight for the nation brand.

What is going to be the impact of the nation brand trustee’s woman abuse accusation on its online reputation? We take a stab at the answer in the rest of this blog, guided by online analytics.

We selected 9 to 14 June for our analysis.

Mention was used for tracking and analysis of mentions for the keywords and phrases – @Brand_SA | Brand South Africa | #BrandSA | #Brand_SA.

A combined 512 online mentions were recorded over the period under review.

Here are the online media sources where the nation brand was mentioned during this period:

Given Twitter’s contribution to BrandSA’s online mentions as shown in the pie chart above, this source is to be used as a proxy for the rest of the analysis.

We selected four social media metrics for our analysis. 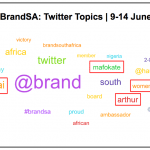 The 2 interactive stacked graphs below show daily contributions of two Arthur Mafokate related topics to BrandSA Twitter mentions. The two selected topics we analysed are @NtsikiMazwai and Arthur or Mafokate.

You can mouse over each of the graphs for popups of daily contributions.

… Arthur/Mafokate was mentioned in more than one of every four BrandSA tweets on 11 June.

The top five BrandSA tweets by reach for the period under review are all related to Arthur Mafokate. This shows that this topic received prominence over all the other topics during this period. 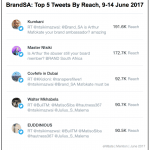 The interactive graph below shows negative and positive emotions expressed in some of the BrandSA tweets during the period under review.

In line with BrandSA’s total volume trend above, the most number of tweets expressing a sentiment were posted on 11 June.

One in every 4 sentiment tweets was negative on 11 June, and this was attributed to Arthur Mafokate.

The highest negative sentiment contribution experienced by the nation brand on 12 June was due mainly to Tourism SA and not Arthur Mafokate.

And SA Tourism reply is in. R9.6million spent since January 2014 on Bell Pottinger. pic.twitter.com/RO8eLr6HlK

We will not comment on the topic depicted in the tweet above, as it is not related to the subject of this blog.

All the 4 metrics above clearly show that the topic Arthur Mafokate dominated BrandSA’s Twitter mentions for the period under review.

The nation brand has since reposted the same message 4 days later (see above).

Every woman at risk deserves our protection. What are you doing to #ProtectThem? pic.twitter.com/BRk7QN4NhC

Is the repost a veiled attempt at responding to the tweetstorm? It does not seem so.

Did BrandSA have to engage during the tweetstorm?

The second #ProtectThem tweet did not ignite another tweetstorm. What does this mean?

Social netizens are not stupid, not least those who wield influence on the likes of Twitter. This insight is worth bearing in mind by all brands, both public and private.

We believe this insight was demonstrated in BrandSA’s case, where conflicting messages that are being communicated were picked up and the nation brand was taken to task.

The conflicting messages are:

It is still early days. However, the long-term impact will depend on the related action that the nation brand takes.

“The last thing to do when your brand reputation is at risk is to keep quiet”
– Daniel Munslow, VMA Africa

BrandSA cannot wish the issue of Arthur Mafokate away. This is getting in the way of this entity’s domestic mandate of building pride and patriotism among South Africans, given the enormity of women abuse problem in the country.

The apparent conflicting messages pointed out in the key insight section are not helping.

While we understand that the nation brand’s Board of Trustees cannot act based on the court of social media opinion that has already found Arthur guilty, the least that can be done is to ask him to take leave of absence until the legal process related to his case is completed. This has to be done urgently to minimise the potential damage.

Upon execution of an appropriate decision, there must be transparency in the communication of such on all platforms including social media.

13 stats about South Africa you need to know, from the Global Digital 2019 Report